Gyro-Viper is the third figure in the Cobra Re-color Project. Gyro-Viper is one of those figures with a decent sculpt ruined by a barfy color scheme. The khaki color seemed more at place on a Iron Grenadier driver than a Cobra and always seemed an odd choice to me.

The flight suit looks like a 50 year old Soviet G suit, is that perhaps what it really is, and its made out of some type of material that cant be dyed? Did Cobra spend so much money on the chopper that they had to pinch pennies on the pilots gear, with cheap Soviet surplus? Whatever the reason Gyro-Vipers colors suffered for it and badly needed some attention.

Gyro-Viper fit into the Aero-Space category and so gets the color scheme of Strato-Viper. The problem with Gyro-Vipers sculpt is that is has very few details on his flight-suit, and most of those are concentrated on his torso leaving the rest of him kind of plain. The end result isn't nearly as flashy as Strato-Viper, but looks the part well enough and matches with Strato-Viper and Vapor nicely. I would have made the hoses silver and the chest harness black, but he needed some red on his legs and the hose was the only decent option for that.

After putting a few silver details on his head I decided to paint the stripe up his chin and over his head in red to spice up the headgear a bit. I experimented with reversing the helmet colors to black with red strap and details, but it didn't tie in as well as the red helmet and how it matched the float device on his shoulders.

The map on his leg I intended to paint with a white backing, but was out of decal paper at the moment so I left it yellow. It has grown on me somewhat now and may leave it as is.
So without further ado, here are the pictures.

Figure: Gyro-Viper 1987
Scheme: Aero-Space
Notes: Here are several shots of Gyro-Viper with and without helmet, and a comparison shot with Strato-Viper. 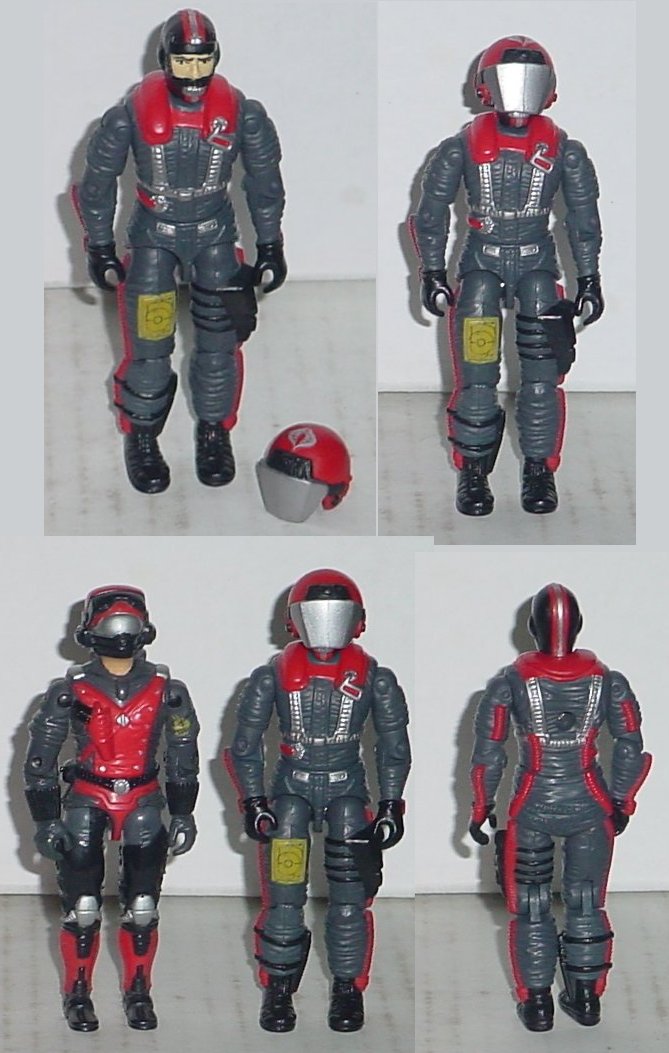