Ice-Viper is the second figure in the Cobra recolor project. No longer does he have to explain why his Snow Serpent brethren get a cool blue scheme while he's stuck with baby poop brown. Since Snow Serpent stood alone as the only pre 86 snow trooper and no drivers, that made the choice for Ice-Vipers color scheme rather simple. By painting him to match Snow Serpent not only did it make him fit in better and look more like a Cobra, it also gave someone for Snow Serpent to match so he wasn't alone in his color scheme. In all I think it brings the Arctic Branch of Cobra together and makes them look more like part of the same army. The Snow Serpent I had loose to pose for pictures is yellowed and faded a bit so its doesn't match so well with the repaint. I matched his paint to a torso I got in a parts lot that was in very good condition so it would be more accurate to a mint figures colors. A piece of plastic bag was placed under his helmet so it wouldn't scratch his head since the paint is still fresh, in case anyone wonders what the white ponytail is hanging out the back.
In my haste I forgot to take pics of the Ice-Viper before the repaint, you would not believe how terrible this guy looked. He was so yellowed his white parts almost matched his baby poop bandoleer and he had droplets of what looked like wood stain splattered all over him. This is precisely the type of figure I love to give new life with a repaint. Anyways, here are the pics. Figure: Ice-Viper 1987 Scheme: Polar Assault Notes: The finished Ice-Viper along with a Snow Serpent for comparison. The Snow Serpent in this picture is a bit discolored due to aging but serves the purpose well enough. 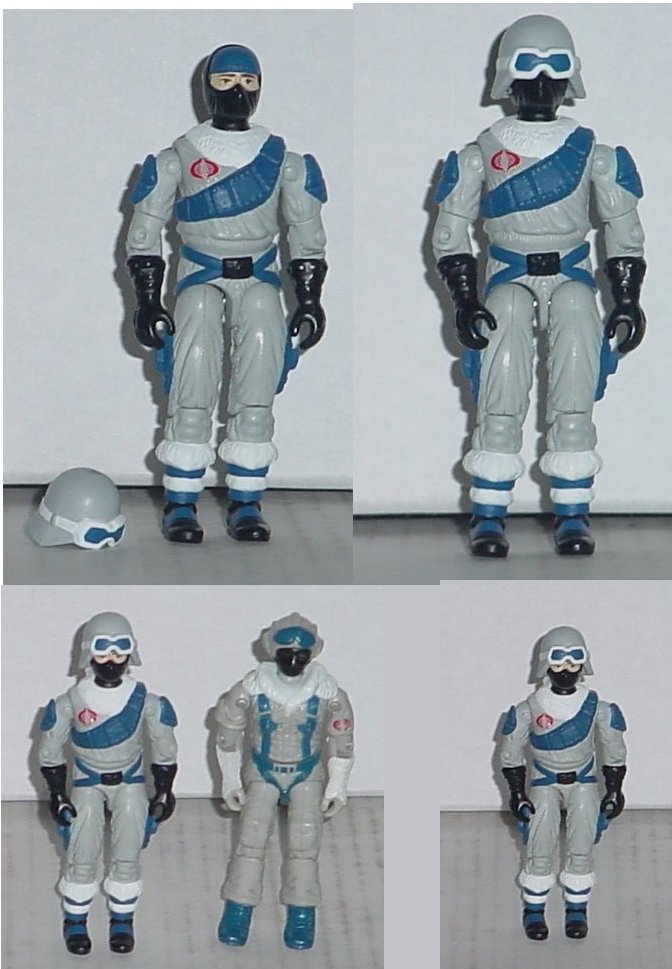