Sea Slug was the first figure to be finished in the re-color project, so a lot of his info here relates to the details of the project itself and was written before the actual website was created. As such, some of the things mentioned here will have already been covered on the main page.

Ever since 87 rolled around and Hasbro broke from the pre-established color schemes for Cobra troops by changing dark navy blue and red to bright violet purple and neon orange, I have wanted to revamp the 87+ figures where necessary to bring them more in line with the Cobra appearance. Though I have fiddled with this a bit over the years before I had a computer, it was always hit or miss since the only way to see for sure what a color scheme will look like is to apply it to the figure. This was all good and well if it turned out nice, but if the color looked bad, then you were stuck. Now with Paintshop its as simple as coloring up a picture to test a color scheme before applying it, so that's what I have been doing when I can find some free time.

To put this project into effect I went through all the Cobra figures and made a list of appropriate color schemes and what type of troopers they are intended for, then went about re-coloring loads of photos to see which color schemes worked best on each figure, and what layout the colors need for the best effect. This formula is equally effective on figures and vehicles and insures that a given color scheme remains consistent with a type of soldier. Ex: All basic troopers are blue with red and black details (matching the Viper), all Air and Space types are dark gray with red and black details (matching Strato and Astro-Viper), etc.

Now at this point I have a batch of test shots done, and just have to hunt down a bunch of figures with ruined paint apps and discolored plastic to use for the project. (I don't like customizing figures in nice condition and prefer to repaint ones that are yellowed or otherwise discolored or damaged.)

One figure I had on hand in poor condition was Sea-Slug, and since he just happened to be one of the first figures to sport the horrid new violet purple Cobra color scheme and had almost all his paint rubbed off, he was a perfect candidate. The final color scheme I decided on for him was off the Lamprey and I have dubbed it "Elite Sailor". In order for a figure to qualify for the Elite Sailor color scheme, the figure must pilot a boat or submersible craft, and he must be a member of the EELS. As an example this means that while Sea-Slug qualifies for this color scheme, the Secto-Viper and Decimator do not because even though they operate a submersible, they are not members of the EELS.

I actually experimented with several other color schemes including the basic EELS colors and Viper colors while developing "the formula" for colors, but none looked fitting the way the Lamprey colors did and in the end, those colors were most suitable for what Sea Slug is. The Sea-Ray vehicle will be painted in the color scheme of the Moray, as will all Cobra naval vehicles in this project.

So here is the first figure of the Cobra Re-color Project. 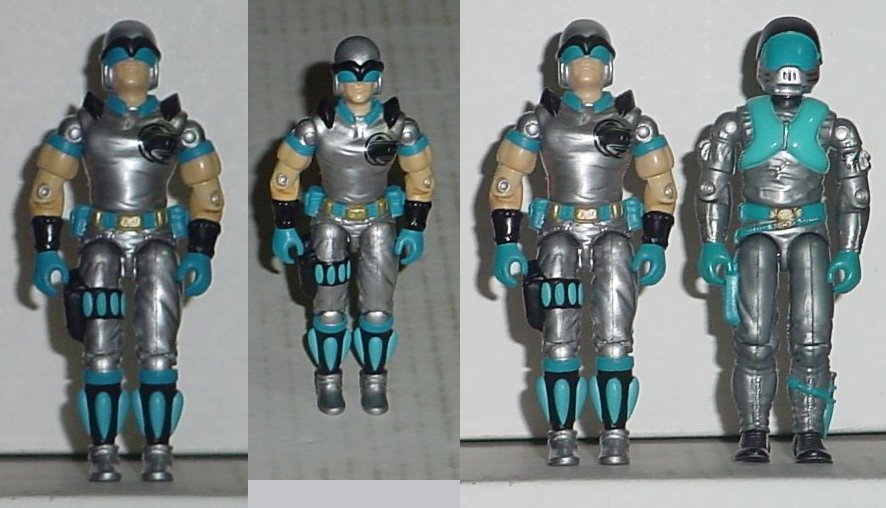