Star-Viper is the sixth figure in the Cobra Re-color Project. This guy looked great from the factory, but he just had too much Iron Grenadier in him, and needed a bit more Cobra to his colors.

The yellow visor from Astro-Vipers helmet was a theme I wanted to keep for all the Space Vipers, but aside from that it was a tossup between coloring him more like Strato-Viper or Astro-Viper. Star-Viper is sort of a half way point between the Strato and Astro-Viper, he operates in space, but his abilities are more focused on fighter craft combat where Astro is more of a traditional astronaut and works out in vacuum on space stations and satellites etc. The Strato-Viper style was decided on, with a touch of gold tossed in to give a little connection to Astro-Viper.

I needed a way to separate his upper and lower half so he wouldn't end up solid gray and dull. Looking at the figure it appeared he has leggings separate from the rest of the suit so this gave me a good spot to divide the colors. I came up with a reason for this, since he's a fighter pilot in the tight confines of his cockpit he would need something far less bulky than what Astro-Viper wears. The black jumpsuit is primarily to protect against vacuum in space, and a more insulated step-in smock is worn over the vital areas to give additional protection against vacuum and cold. He wouldn't need the level of protection Astro-Viper has, just enough to keep him alive until a rescue shuttle arrives if he ejects from his ship, or to get him back to base if he loses cabin pressure.

By using the gray step-in smock over black jumpsuit idea, I was able to make his legs black similar to Strato-Viper and keep him from suffering the problem Gyro-Viper had of the solid gray jumpsuit and not enough other details to break it up. It also gives the impression that there is something different about his suit, its not just a simple nomex flight suit but a more advanced space suit of some sort.

I did this guy first with a silver Cobra logo on the face, but it was so shiny and bright that it looked like a hood ornament on a Mercedes. I decided to try it in red but that looked awful next to the yellow face plate. I was thinking about leaving it black, then I decided to try it in gold and this seemed to work out pretty good. It gave a good compliment to the faceplate, but much more toned down than the silver and was less overwhelming.

Here are the final pics, he fits in great with the other Cobra Aero-Space guys now and doesn't look so much like an Iron Grenadier.

Figure: Star-Viper 1988
Scheme: Aero-Space
Notes: Here are several shots of Star-Viper from various angles, and a group shot next to the two figures he is most closely related. Here you can really see the balance this figure strikes between the other two, and together they look like a transition from pilot to astronaut. The pistol grip and knife handle I painted silver at the last moment to add a little more detail to the legs. 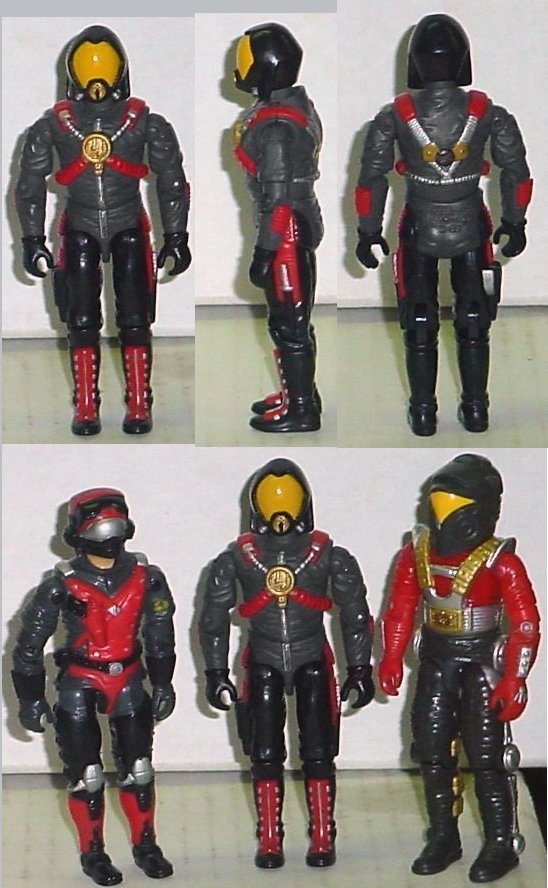