Toxo-Viper is the fifth figure in the project, and the first of the 88 series to be completed. I have to admit I have always been a fan of this figure, his concept seemed just like something an evil army like Cobra would use. His suit always really looked the part too as an evil Hazmat suit. The only problem with the guy was that horrible color scheme that just didn't do the figure justice.

What this guy needed was something that fit in with Cobra yet had a bright, hazardous edge to it. The B.A.T. color scheme was decided on because of some details these two troopers have in common. Both of them are considered completely expendable and both are just as dangerous to Cobra troops as the enemy. The B.A.T. colors also made for the perfect evil hazmat colors and fit very well. The color scheme is a pretty close mirror of B.A.T. in the placement of his colors with yellow hoses/straps and silver metal parts. The yellow hose theme was carried up to the helmet as well.

I decided not to use any yellow on his head since his skin has a very yellow tint to it and the yellow would blend in with it to much and not create enough contrast. The details of the head remained in question though because of the oddness of the hood he wears.

I have always wondered what that strap across his mouth was for, it doesn't appear to be breathing gear or anything technical and with those two big rings on the cheeks it kept reminding me of a Bit used for horse riding. As I was base coating his head it suddenly occurred to me that this idea might not be far from the truth, it appears to be a gag strapped across his mouth.

It could be so they cant complain about how bad their job sucks, but its infinitely more likely they are fellows who spoke out of turn or talked back to a superior Officer. In an army of greedy, power hungry criminals, respect for authority is probably in pretty short supply, and trash talk to superiors likely common. Nothing like a few weeks in a leaky hazmat suit with a gag strapped to your face to make you learn when to shut your mouth. Everything about the Toxo-Viper is cruel, from the weapons he wields and the effect they would have, to just being one and having to risk the suit leaking and doing who knows what to you. The face gag just seemed to fit right in with the overall cruelty of this figure and the more I look at it and think about it, the more sure I am that a gag is indeed what it is. I decided to paint his chin in flesh color to see how it looked and that sold it for me so I kept the flesh colored chin and the "gag" effect.

Only other big deal on this guy was the Toxo-Cobra logo that had to be hand painted first in white base coat, and then over-painted in yellow. Cobra logos are always a pain because if they are the slightest bit lopsided it really shows, a Cobra logo with a Biohazard overlaid on it is even worse. I tried it first in a small size like normal arm Cobras but it looked too jumbled and messy, so I enlarged it some and it turned out much more clean looking. I almost painted the Cobra part of the logo red just to add some flare, but no other figure ever had a two color logo and I want these to look factory, so I saved the idea for another project.

Anyways, here is the final outcome. I think he turned out pretty solid, with a good biohazard look but still being dark and sinister.

Notes: The wiring under his chest piece is colored to match the details in B.A.T.s chest hologram; Red, Yellow, Green, Aqua blue. 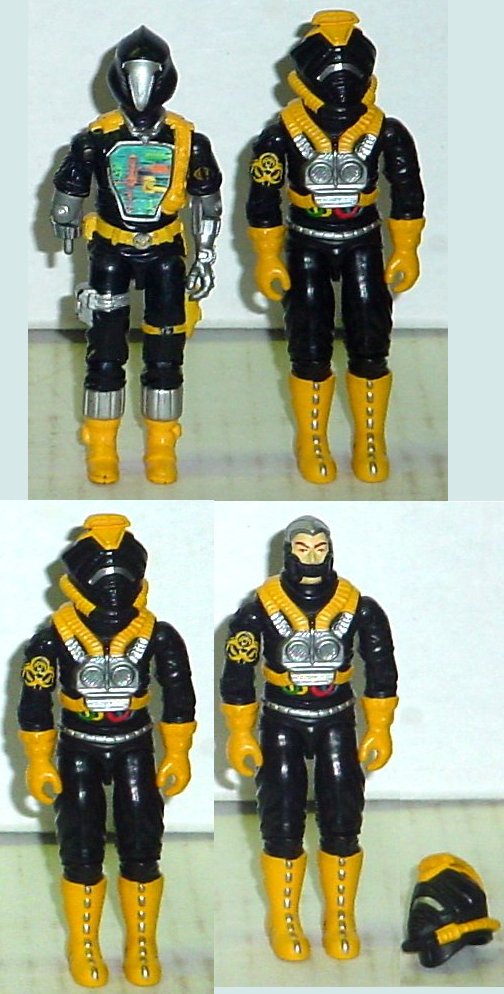