W.O.R.M.S. is the fourth figure in the Cobra Re-color Project. It took a while to find a Worms in bad enough shape to repaint, and when I did, he was so bad it took even longer to prep him for painting. In line with my repaint formula, Worms gets the combat vehicle driver color scheme shared with Stinger Driver and Track-Viper. I tried some of the other color schemes too just to see how they looked but this one seemed the most fitting given his role and the figures design. I had a number of obstacles to get across before I could begin on this one. For one the figure was very caked with grime, and had some of his detail scraped off from what looked like a close encounter with rough concrete or a belt sander. The figure also had a broken knee peg that had been glued in, and was missing the antenna for the helmet. Considering the figures condition I'm really surprised it even had a helmet, and luckily its Cobra logo was all but gone so I didn't feel bad repainting it. The grime was pretty easy to clean with a toothbrush and some dish soap, and I had an extra pair of Worms legs to swap out the thigh with broken knee peg. Most of the scraped off detail wasn't really noticeable and a bit of sculpting putty fixed the obvious scratches. The antenna was the tricky part, and I was certain it would look cheap if I left it off and filled in the hole, so I had to build one from scratch. Using a piece of paper clip wire with a 90° bend at the end to fit in the hole, I then cut a slice off an old model kit sprue and drilled a hole in the middle and slid it down over the wire to make the little ring around its base. Then after gluing the wire into the helmet and the ring in place, I filled the hole with sculpting putty and shaped it to look like the original square plug, and used some more putty to make a little ball on the tip of the antenna. It ended up being a little longer than the original, but its way more sturdy. The paint job itself was pretty straight forward once a pattern of colors was decided. The figure is kind of hard to apply a decent Cobra color scheme too, he just screams for traditional military colors with his uniform design. The only real pain with the paint process was that Cobra logo on the helmet. With no Cobra stickers in that size that I'm aware of and his forehead being so rounded they probably wouldn't work, I had no choice but to hand paint the logo and that is always a nightmare, especially when its that small. I actually painted this guy first with black gloves and solid dark gray helmet, but it ended up looking too drab. The gloves were too dim next to all these other neutral colors and made the center line and lower half of the figure very dull. Making the gloves red added some color below the belt line and gave him a firm link with Track-Viper. The helmet meanwhile looked plain and featureless so it needed something to give it some detail. First I tried making the dome black and it kind of worked but made him look like he had a low forehead, so I tried the light gray and that seems to do the trick without being too obvious. The red details on the antenna were an afterthought to add a little extra detail and color to the helmet before I decided to undertake the application of the Cobra logo. Once the logo was on there the antenna didn't really need the red, but I liked it and left it there. The details on his head around the eye hole and on the face mask really looked like they needed to be painted, but none of the colors available on the palette looked right so I just went with solid black for a good basic Cobra look. Here are the pictures of the final result. Figure: W.O.R.M.S. 1987 Scheme: Combat Driver Notes: Several pictures of him with and without the helmet. A Track-Viper is used for comparison. 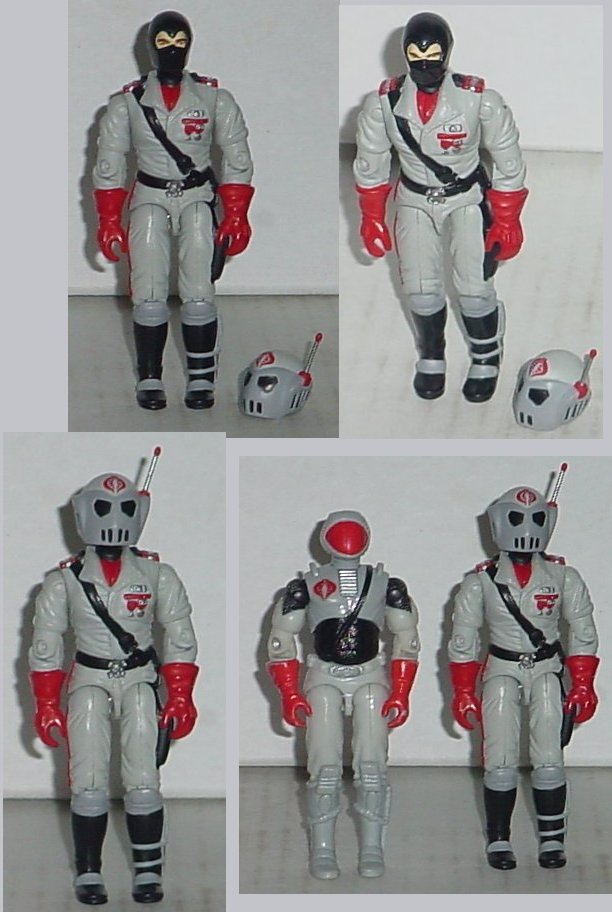